One of the most frequently asked pet questions is, â€œAre dogs colour blind?â€ And one of the most frequent misconceptions is that the answer is a simple yes. The question of whether or not dogs can see colour has sparked much debate and research over the years. Whilst the answer is not a simple yes or no, we must understand that dogs can see colour but they are still technically colour blind.

Dogs are able to see colour, just not to the extent that humans can. They are actually dichromatic which means they can see two primary colours â€“ yellow and blue. Humans are trichromatic in their ability to see three primary colours â€“ yellow, blue, and red. This is partially due to the composition of the eye itself. The eye consists of cells known as rods and cones. The former is responsible for seeing black and white while the latter is all about colour. 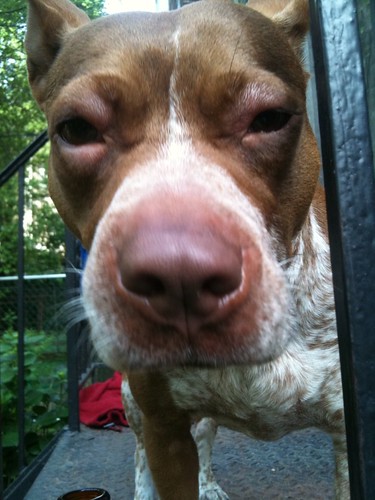 The human eye is made up about 7 times more cone cells than the dog eye. The more cone cells an eye has, the brighter and more pronounced the colours will be. Because of their low cone count, when dogs do see colour, it appears pale and faded. In contrast, dogs have a higher concentration of rod cells which means that they can see much better in lower light situations.

Contrary to what most people believe about dog vision, they can see colours in addition to various shades of grey. As mentioned, dogs are dichromatic which means they have two different colour receptors. These colour receptors peak at yellow-green and blue-violet which means that dogs are green-blind. This is where colour blindness comes in. Colour blindness occurs when any colour deficiency is present. Most colours are muted so red and green may actually appear yellowish and brownish or even shades of grey.

Because of the way the dogâ€™s eye is constructed, an orange ball lying on green grass may all look yellow to the dog. However, this is not to say dogs have inferior vision simply because they do not see colour the same as we. Most dogs have exceptional depth perception because of the position of their eyes. Their perception of movement is also quite strong, especially in the distance, although vision close up is not as good.

As dogs get older, their eyes change, just like ours. In most cases, the eyes of older dogs may appear cloudy which is often due to nuclear degeneration. As the nucleus of the eyeâ€™s lens ages it gets harder and denser changing how it refracts light. Despite these physical changes the vision is affected very little.

When puppies are born, their eyelids are closed because their eyes are still forming. The eyelids remain closed for the first two weeks of life. When the eyes open, they typically appear bluish-grey and hazy. By the age of 8 weeks, the puppyâ€™s eyes will have achieved adult coloration but vision is still developing. However, it is at this time that they begin to see the colours they are able to.