How Do Dogs Think?

Understanding how dogs think gives us an insight in to the mind of one of the world’s most respected brains. The canine mind is as fascinating as it is complex. So, just how do dogs think?

As Pet Owners, We Tend To Forget That Dog’s Are Nature’s Animals

Several thousand years ago dogs were initially domesticated for their functional value; hunting helpers, village and stock guards, even body-warmers in bitter cold climates. These basic functions are no longer required by modem civilization and, the dog’s capacity to cooperate within a group for the mutual benefit of its members is stifled – frustrated. Without some meaningful functional nurturing, dogs grow older, mature physically, but behave like puppies emotionally – seeking attention and care, totally frustrated, denied any competent guidance toward filling an acceptable role in the family. 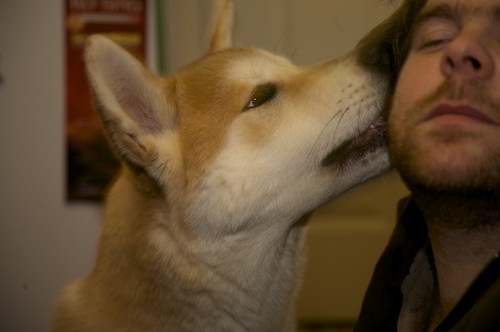 On the human side of the equation, as we become increasingly dependent on verbal skills and electronic communications, a pet animal is sometimes our only meaningful daily contact with the animate, natural world. However, without an opportunity to develop nonverbal communications with animals, dog owners tend to use human verbal and physical abilities (vocal commands, scolding, manipulation, force, punishment) to communicate with their pets. Most people mistakenly think dogs must simply be “trained” if they are to learn how to behave properly. When training fails, both owner and dog become frustrated, and problems develop. While formal (deliberate) training is an important element in a satisfying relationship, informal training is at the root of most problem behavior.

Dogs learn from, and react to, the way people behave. Movement, stance and sound communicate with dogs. On the other hand, as dogs struggle to communicate with people through their own movements, postures and sounds, they are too often misinterpreted; or ignored. This only widens the frustrating communications gap for both parties.

It may seem far-fetched to propose that behavior consultants should help dog owners learn how to interpret their pet’s behavior, then use movement, stance and special sounds, in order to communicate effectively, and hence, live together harmoniously. However, it is not unrealistic at all. Once the basics of effective human/canine communications are learned and applied, they play a crucial role in correcting behavior problems humanely and effectively.

It doesn’t occur to most dog owners that shouting at a barking dog is, in fact, joining in the racket – responding with the human version of the same behavior. When their dogs do become silent,  it is because they associate the owner’s tone of voice with disapproval and/or fear of impending pain from punishment. Excitable types, or those with some prior traumatic experience, usually become worse.

In the non-verbal world of dogs, silence means quiet, inaction begets stillness, and movement stimulates action. The fact that this patently obvious facet of non-verbal communication must be written or talked about to gain attention among dog owners further points up the extreme verbal orientation of humans. Spoken language is just noise to dogs. It is a tribute to their adaptability that they actually learn the meaning of certain key sounds, which usually comes about through a combination of the dog’s intelligence and the owner’s almost accidental consistency when referring to certain events or objects.

Pet Library is a pet care information site for people who seek quick, easily accessible advice on a wide variety of pet topics.