Home / Pets (General) / General Pet Care / Positive Reinforcement Dog Training
"Positive reinforcement training is a holistic approach that affects the emotional and physical well-being of dogs," explained Janet Oquendo, owner of Pawz for Health. "People associate well-being with nutrition and exercise but emotional well-being complements physical well-being. If a dog's mind isn't at peace, the whole body breaks down eventually." Oquendo has been training dogs for more than 10 years and officially started her own dog training business in 2010. She acquired her skills under some of the area's leading dog trainers and animal behaviorists, mentoring under Debbie Winkler, IAABC, CPDT-KA and receiving further education from behavior veterinarian Dr. Ian Dunbar, founder of the Association of Pet Dog Trainers. She also trained closely with Dawn Sylvia-Staswiewicz, trainer to President Obama's dog, "Bo." Now Oquendo provides in-home training services to clients ranging as far as Pennsylvania to the Washington DC. When she first looked at different approaches to dog training, Oquendo was excited by operant conditioning and positive reinforcement training, which stimulate a dog's mind in positive ways. She found that dogs always responded with a heightened desire to please when they were offered positive motivation in the form of an edible or verbal reward rather than being subjected to choke collars, shock collars and other equipment designed to frighten or inflict pain. 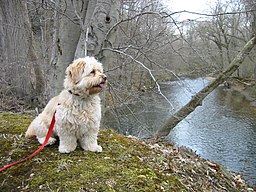 For example, Oquendo once encountered a couple walking two Rottweilers. She noticed that the dogs were wearing pinch collars, so she began talking with the couple. They explained that they used the pinch collars for greater control and because the dogs would not come when called. Oquendo persuaded the reluctant couple to drop the leashes, and within 10 seconds, the dogs were following her obediently by simply using positive reinforcement rewards on the spot. Dogs not coming when they are called is the most frequent problem Oquendo's clients ask her to solve. In fact, her neighbor became so frustrated with his Husky that he was on the verge of handing the dog over to a shelter. However, Oquendo discovered that the only time the family called the dog's name was when she was going to be punished. She had them give the Husky treats when calling her and successfully helped the dog re-associate the calling of her name with positive reinforcement. "In a society where we are all looking at improving our mind, body and spirit, many of us are looking to do the same for our dogs," Oquendo said. "It's possible with positive reinforcement training. It really works!" Oquendo volunteers with a local rescue group called Tails of Hope. She currently owns four rescue dogs: two Rottweilers, a Chow and a Husky mix. Useful Resources: Dog tips
Dog fleas
Dog training books